Milwaukee Croatian Community on the Move

MILWAUKEE, WI – There is a tremendous excitement taking place within the Milwaukee Croatian Community like we have never seen before. Our Board of Directors of the Federation of Croatian Societies Inc. and owner of the 30 acre Croatian Park in the city of Franklin, at its annual Croatian Fest held on July 17th announced to a record attendance the construction of a new and modern 6,000 square foot pavilion with a large stage, seating for more than 300 with a dancing floor, full service bar, and fully accessible restrooms. On display throughout the most beautiful day were enlarged architectural photos of the pavilion. Enthusiasm for this project was electric.

In addition, Croatian Eagles, one of the oldest ethnic soccer clubs in North America with Croatian Park being their home base since 1956, are in the process of constructing a full-size turf field. They currently have five natural grass fields and are much in need to add the turf field due to exponential growth of soccer at the Croatian Park with over 1,500 youth participating. We will have more details on this project in the months to come. As such, we are delighted to share this exciting news with all of the CFU members throughout the U.S., Canada, and our homeland of Croatia. This represents one of the most aggressive projects in the Croatian Park’s 65-year history.

It is estimated that the State of Wisconsin is home to approximately 15,000 citizens who claim their Croatian ancestry. It is a relatively small population compared to other states in the U.S. and provinces in Canada, however, despite being small in numbers our history is very rich in progress in preserving our Croatian identity particularly in the greater Milwaukee area where we have the largest Croatian population along with two Croatian churches. A large number of Croatian immigrants started to settle in Milwaukee and Wisconsin at the turn of the 1900’s. As they settled, the number one goal in their minds was to preserve their Croatian culture and the game of soccer. They yearned to have a place of their own where they could gather for picnics and cultural events. Many of them joined the Croatian Fraternal Union which was in existence since 1894, and in the 1920’s joined Croatian Catholic Union. They also started to organize various singing societies, cultural groups and their own Catholic churches. Much of their history and accomplishments are not known, especially to the newer generation of Croatians who reside in the Milwaukee metropolitan area. Therefore, it is noteworthy to share the glorious history of the Croatian Community of Milwaukee. It all started on March 26, Twenty-three Milwaukee Croatian organizations banded together to create one organization under the name of Croatian Federation, or Hrvatska Sredisnjica. The members included five Croatian Fraternal Union Lodges, 261, 392, 807, 391, 255, three Croatian Catholic Union Lodges, 12, 20, and 36, two Croatian churches, Sacred Heart and St. Augustine, and other organizations such as Hrvatska Seljacka Stranka (Croatian Peasant Party), Hrvatska Zena (Croatian Women), First Croatian Ladies
Benefit Society, Croatian Eagles Soccer Club, Croatian Sokol, Croatian Dancing Group, St. Cecilia Singing Society, Sloboda Croatian Band, Zagreb Singing Ensemble, Croatian Daughters Tamburitza Band, Croatian Sons and Daughters Dancing Ensemble, and Sloboda Singing Ensemble. Indeed, this is a very impressive, passionate, and committed group of organizations. On November 16, 1938, Croatian Federation, Inc., became incorporated in the State of Wisconsin.

As our readers have witnessed by the above impressive and united list of Croatian organizations, one thing was lacking for all of them. They needed a central ground where all of them could gather during the summer months for their picnics and further showcase their rich Croatian culture to their newly adopted homeland of the United States of America, more specifically the greater Milwaukee community. In 1954, the Croatian Federation began to save money with the goal to purchase a tract of land that they would proudly proclaim as their Croatian Park. They quickly saved a sum of $5,000. In the area of Franklin, a suburb of Milwaukee, a tract of 20 acres of land was for sale. On October 22, 1956, the land was purchased for $15,000. However, the Croatian Federation could not get a loan for the $10,000 they needed to finance as they had no collateral other than their $5,000 they saved and put it as a deposit for the purchased land. To the rescue came a well known Croatian businessman, the late John S. Rupena who cosigned the loan at the Marine Capital Bank. This was such an outstanding gesture and commitment
on the part of John S. Rupena. It is noteworthy to point out that Rupena’s Fine Foods in West Allis, which was started by John Rupena in 1925, is thriving today under the able stewardship of John’s granddaughter, Maria Rupena Karczewski, as the store’s President. The Federation of Croatian Societies is forever grateful to the late John Rupena for stepping in when our Croatian Community needed him and thus enabling us to have the Croatian Park to this day. John and his family were all proud members of the Croatian Fraternal Union. In 2025, Rupena’s Fine Foods will celebrate their 100th Anniversary. The officers of the Croatian Federation during 1956 when the Croatian Park was purchased included the following proud Croatian leaders: President-Louis Rukavina, First Vice President-Ante Ruzic, Second Vice President-Steve Dejanovic, Secretary-Slavica Modrijan, Assistant Secretary-Andjeljko Mihaljevic, Treasurer-Anna Sziebel, Assistant Treasurer-Anna Rukavina, Supervisory Committee- Martin Rukavina, Steve Adamovic, and Steve Skender, and Educational Committee-Josephine Burazin, Steve Weber, Helen Dejanovic, Sophie Peter and Magda Grgezic. In addition, no doubt there were many others who contributed greatly in those early years. We are forever grateful to all of them. Out of this group, one is still living, Josephine Burazin Panhans. Her late husband, Joe, devoted a lot of time taking care of the park.

It is estimated that the new pavilion will cost upwards of $800,000. The campaign to raise necessary funds has already started with some of the major gifts committed. We are delighted to report a $100,000 gift has been received from Branka and Mike Dudas, in memory of Boris “Buco” Kuzmanovic, who passed away at a young age of 48 in 2019. Buco was a talented musician and Croatian patriot. He grew up on the soccer fields of Croatian Park playing youth and Major Division soccer for the Croatian Eagles. Buco was the brother of our Federation President Tomislav Kuzmanovic and Branka Dudas. With this substantial gift, from Buco’s sister Branka and brother-in-law Mike Dudas, our Board of Directors has decided to name the new pavilion “Boris Buco Kuzmanovic Pavilion”. A $50,000 gift is being donated by Paul Lucas in honor of his wife, Patsy, who is well known in our Croatian cultural community throughout the U.S., Canada, and Croatia for her extraordinary and lifetime dedication to Croatian music. A stage in the pavilion will be named in her honor. Furthermore, at our Croatian Fest on July 17, CEO of Catholic Financial Life, Bill O’Toole, pleasantly surprised our Board, this writer, as well as all those in attendance at Croatian Fest with the announcement that Catholic Financial Life is donating $50,000 in honor of Mike and Anne Stivoric. For our CFU members who may not be familiar as to why this substantial gift is in honor of myself and my wife Anne, it is due to the fact that I served Catholic Financial Life as its Sr. Vice President for 28 years, a member of the Board of Directors, and I am currently the Chairman of the Board. A full-service bar in the pavilion will be named after Catholic Financial Life. With these major gifts, we now have twenty-five percent of the funds to serve as the solid foundation to raise the remaining $600,000. The pavilion is now a project that has been on the federation drawing board for decades. The long-awaited dream is now a reality. In future communications in the Zajedničar, we plan on conducting our appeal for donations. We can safely report that there is tremendous excitement and we feel confident that by this time next year, our Croatian Fest 2022 will be held in our new Boris “Buco” Kuzmanovic Pavilion with entertainment coming from the Patsy Lucas stage and guests enjoying their favorite beer and spirits imported from Croatia at the Catholic Financial Life bar. 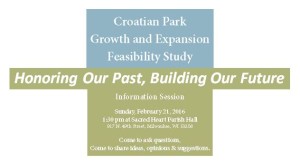 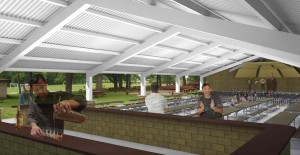